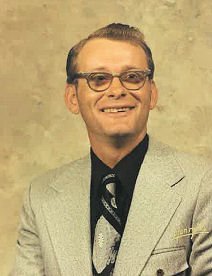 Bruce was born in Britton, South Dakota to Martin Henry and Margaret Rodocker Olson.  He was preceded in death by his brother, Larry Martin Olson.

Bruce grew up in Rutland, North Dakota until 1947-48 when his family moved to Arlington.  His family moved back and forth to North Dakota for several years, his father worked for a pipeline company in Ft. Worth and when Bruce was old enough he went to work for the same company.  He worked for many years in Ft. Worth and Oklahoma with his father.  He retired in the 1990’s and moved to the English Community with his mother next to his sister, Sharron and Dot Sexton.  Bruce eventually moved into the Senior Apartments in Clarksville.

Bruce was a sweet and kind man, who loved all sports and had a memory for all kinds of sports trivia.   He knew the scores and who was playing and the outcome of all the games he had seen on TV.  Western movies were his favorites and had a beloved collection of Elvis Presley records.  In the last few years, Bruce’s favorite pastime was going to Tracy’s Café and visiting with the locals.  He made lots of friends there and was treated very special by everyone.

Survivors include his sister, Sharron Lea Sexton and husband, Dot of the English Community; his namesake and nephew, Bruce Alan Stewart and wife, Deborah of the English Community; and their children, Jessica Lynn Stewart and her son, Braydon of Waco; nephew, Joseph Martin Stewart and wife, Rebecca of Larned, Kansas; and their children, Andrew Michael, and Alexis all of Larned, Kansas.  Bruce had many aunts and uncles in North Dakota and Minnesota and many cousins all over the United States.

The family will receive friends an hour before service time at Clarksville Funeral Home.

Memories and condolences may be added at www.clarksvillefuneralhome.com .

Share Your Memory of
Bruce
Upload Your Memory View All Memories
Be the first to upload a memory!
Share A Memory